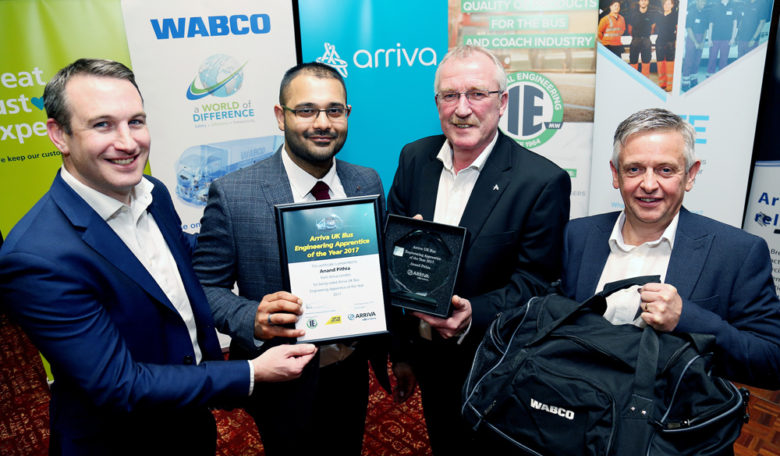 John Dwight (left) is pictured presenting the Engineering Apprentice of the Year 2017 Award to Anand Pithia, alongside Mark Bowd from Arriva UK Bus and Julian Wedgery from Wabco (right).

Now in its fifth year and sponsored by Imperial Engineering since inception, the annual Arriva UK Bus Engineering Apprentice Awards saw an evening of celebration and recognition of the achievements of some of the UK’s brightest engineering talent within the PSV sector.

The gala awards evening was organised by Lloyd Mason, Engineering Development Manager for Arriva UK Bus, a leading light in bus apprenticeships and training within the bus and coach industry, who headed up the Government Trailblazer Group to produce a framework for new apprenticeships in the HGV and PSV sectors.

Demonstrating its commitment to training engineers of the future, Arriva UK Bus recently opened a new apprenticeship academy in Derby, in addition to academies in St Helens and London. Operated by Arriva Midlands, the latest academy will have an intake of twelve students per year who will follow a four-year apprenticeship. It’s expected that the academy will become a centre of excellence for staff across the business, offering engineers the opportunity to upskill with continuous professional development training and bespoke courses devised by Arriva UK Bus and vehicle manufacturers.

Lloyd Mason commented: “Not only will new trainees benefit but current staff will also get the opportunity to learn as well. At a time when the Government is tasking employers to devise apprenticeship programmes which are relevant to their needs, Arriva is helping to design the new national bus and coach apprenticeship programme and creating courses for our own employees.”

Leading PSV parts distributor, Imperial Engineering, has been an advocate of bus apprenticeships for several years.  The company actively supports apprentice training by organising training sessions with its OEM suppliers, such as Knorr-Bremse, Haldex and Wabco for customers including Arriva UK Bus, Go Ahead, London United and Metroline, as well as the provision of training materials. Most recently, Imperial has just completed the manufacture of three pneumatic disc brake training rigs commissioned by Arriva.

John Dwight, Imperial Engineering’s Sales Manager, said: “Once again, it was my privilege to recognise the dedication and achievements of apprentices starting their careers in our sector. Arriva UK Bus is a showcase example of how to manage training for the next generation of engineers and Imperial Engineering is proud to continue its close association with this important work. In opening a brand new academy, Arriva UK Bus has firmly cemented its ongoing commitment to the development of skills throughout its workforce and we are excited at the opportunities ahead to contribute in any way we can.”

OE bus and coach parts supplier, Imperial Engineering, has been distributing premium quality parts for over 50 years.  The company is a primary distributor for Knorr-Bremse bus parts, Wabco parts, Haldex parts and Meritor parts and only sells brand new OE products, providing customers with the assurance that they are fitting the highest quality components.  Imperial Engineering offers a wide range of bus and coach parts, including braking and friction products, propshafts, steering components, water pumps and turbochargers.  Imperial’s own van fleet will collect old core upon delivery of customer ordered parts.