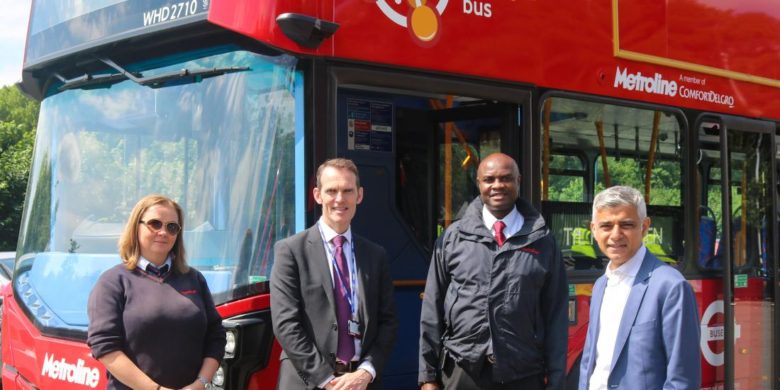 Introduced first on Metroline’s inner-city service between East Acton and Oxford Circus in London, the new hydrogen buses add to Transport for London’s fleet of over 500 electric vehicles, which is one of the largest fleets of zero-emission buses in Europe.

Twenty hydrogen-fuelled double deckers will be operated by Metroline, as part of The Mayor of London’s pledge to make the capital’s bus network to be fully emission-free by 2030.

Hydrogen used in a fuel cell is free from harmful emissions. The only by-product is water from the chemical reaction of hydrogen with oxygen from air, a process that produces electricity to power the bus. It is expected that these latest generation zero-emission buses will contribute to improved health of Londoners by reducing the level of harmful nitrogen oxide in the air. Passengers will also benefit from smoother, quieter journeys due to fewer vibrations and will be able to take advantage of free-to-use USB charging points.

The investment made by TfL in the hydrogen bus fleet has had wider benefits to the UK. The buses were manufactured by Wrightbus in Northern Ireland, helping to create new jobs, whilst the cylinders and hydrogen gas are produced in England. From 2023, the hydrogen will be even greener, as it will be produced by electrolysis, powered by a direct connection to an offshore windfarm. A specialist fuelling station will be used to top up each hydrogen fuel cell bus just once per day, in as little as five minutes.

In addition to around £6million of funding from TfL, more than £5million has been provided by European bodies, including the Fuel Cells and Hydrogen Joint Undertaking and the Innovation and Networks Executive Agency (INEA). A further £1million of funding came from the Office of Zero Emission Vehicles.

“Hydrogen is an extremely promising renewable fuel for public transport vehicles and we are looking forward to proving its application on London’s roads. The hydrogen buses are an exciting new addition to our fleet and highlight Metroline’s continued dedication to making London’s streets greener. Our engineering teams have been hard at work preparing the buses for service and we are proud to be operating the first hydrogen powered double-deck buses in London, in the hope that it will further showcase the application of sustainable vehicles in the capital.”

“The introduction of the first hydrogen double deckers to London’s roads, operated by Metroline, is another demonstrable example of the UK’s bus industry commitment to rolling out state-of-the-art and zero-emission vehicles to tackle the urgent need for cleaner urban air. Having both electric and hydrogen fuelled buses in operation on a growing number of routes in London and around the whole UK is very encouraging and sends a clear signal to the travelling public that bus transport continues to improve in a sustainable way.”