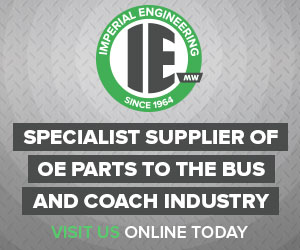 The quest for zero-emission public transport has not been slowed by the Covid-19 pandemic with more operators committing to trials and orders of fully-electric buses.

Bus and rail operator Abellio has just launched its first fleet of electric buses in London, following an order placed last year with Portuguese manufacturer, CaetanoBus. The project marks the first use of Caetano’s electric buses in the UK.

Go North East has started an extensive trial of various electric bus models, including an Optare Metrocity EV, ahead of what it says will be more joining its fleet to add to the nine Yutong E10 models already on order. These are being purchased with financial support from the government’s Ultra Low Emission Bus fund.

ADL is helping National Express to take its first major step towards a zero-emission bus fleet with the supply of 29 BYD ADL Enviro400EV electric double-deckers to its West Midlands operation, through its partnership with Chinese conglomerate, BYD Europe. The buses are charged entirely by renewable energy and utilise a stationary battery system to balance the load on the electricity grid. Since being introduced over a year ago, some 250 BYD ADL Enviro400EV models have been sold and two thirds of them are in service in UK cities.

Electric vehicles in the UK

Electric vehicle start-up brand, Arrival, has a zero-emissions bus ready to go into production in the UK, aimed at “making public transport viable in the coronavirus era”. Featuring a composite body, the bus has a number of features to ensure safe travel, including a zero-touch bell and removable, cantilever-style seats to facilitate social distancing. Smooth interior surfaces with no seams between wall and floor are designed to make the vehicle more hygienic and easier to clean. Arrival intends to launch its bus over the coming months.

Earlier this year, the government created a £50m fund so that local authorities could bid for grants to help pay for a new fleet of electric buses, in pursuit of an objective to become England’s first town to have all-electric buses. The DfT said that the winning town would be used as a model by government as it aims to ensure all buses are fully electric by 2025.

Additionally, a wider package of measures for buses was also announced, as part of the government’s cleaner air initiatives. These included funding towards high-frequency “Superbus” networks. One is already in place in Cornwall, where a mix of lower fares, more frequent services and extra bus lanes has so far proven successful.

A number of local authorities outside of London have been allocated grants in 2020, to help them improve or restore bus services that have been cut. A 2019 study by the Campaign for Better Transport found that more than 3,000 local bus routes had been lost or reduced over the previous decade.

£20m has been earmarked towards trials of on-demand buses, which can be ordered through an app. Primarily designed for rural or suburban areas where passenger demand doesn’t justify having fixed routes permanently in place, an Uber-style bus service is already operating in Liverpool. The scheme is run by Arriva which is working with Merseytravel to allow passengers to determine the route of a minibus by entering their pick-up point and destination on a mobile phone app.

John Dwight, Sales Director of Imperial Engineering, which supplies OE bus parts to hundreds of operators across the country, said:

“There’s been a huge commitment by operators to improve environmentally friendly services, so it’s encouraging to see this ambition is still on course, despite the effects of the pandemic. As one of the UK’s leading suppliers of OE parts and components for buses and coaches, Imperial Engineering continues to adapt and expand its product range, which will ensure we respond efficiently to changes in the operator market with the uptake of more ULEV and zero emission models.”