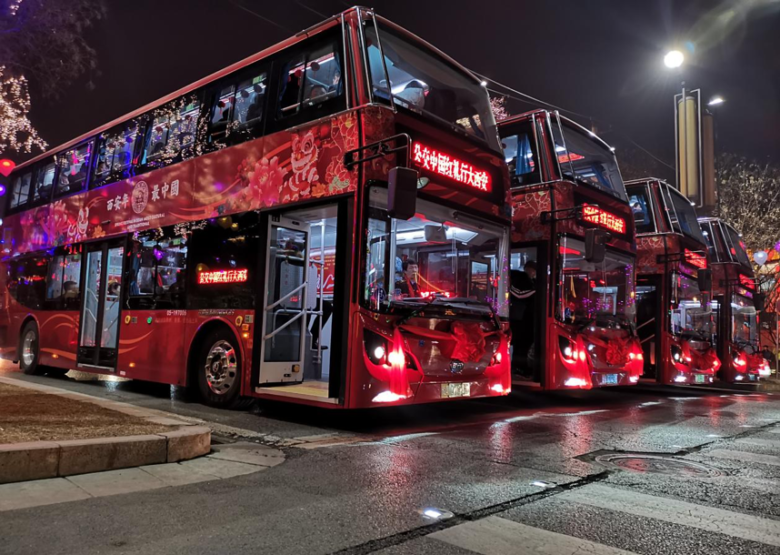 The first K9 pure electric bus rolled off BYD’s production line in Changsha just nine years ago and now they are used in more than 300 cities around the world with the majority deployed in China. Transport for London took delivery of its first BYD electric double-decker in 2015.

Northwest China’s city of Xi’an recently became the world’s leading city for electric buses, having ordered a further 200 zero emission vehicles from BYD, taking its municipal fleet total to over 3,000. In comparison, the entire European and U.S.A EV bus markets combined has yet to surpass 5,000 units, across all other manufacturers.

Xi’an’s additional 200 K8S double-deckers will provide citizens and visitors with more environmentally-friendly travel and help the city showcase its blend of ancient and modern architecture and attractions, as a key hub of China’s ‘Belt and Road Initiative’.

Back in January 2015, BYD officially unveiled the world’s first 100% electric coach, a single-decker named the BYD C9 with a projected real-world range of 190 miles. Since then, however, the PSV industry in China and globally has been focused on delivering economically viable, shorter range electric buses, in order to comply with increasingly tough urban emissions legislation. In fact, major manufacturers, including MAN and Daimler Buses, claim that coaches with purely electric powertrains would not stack up commercially without a revolution in battery energy density. Consequently, no OEM anticipates coach electrification in the medium-term future.

“The fast-growing electrification of inner city buses makes environmental and economic sense as lower range and access to charging infrastructure enables a viable business model for urban operators. Clearly, zero emission coaches would square the circle for 100% clean PSVs but the influence of the world’s largest economy on making bus travel both affordable and emissions free cannot be overlooked. As a market leader in the supply of brand new parts to the bus and coach sector, Imperial Engineering is fully focused on supplying the highest quality components to ensure we always provide operators with availability and reliability of parts for their vehicles.”