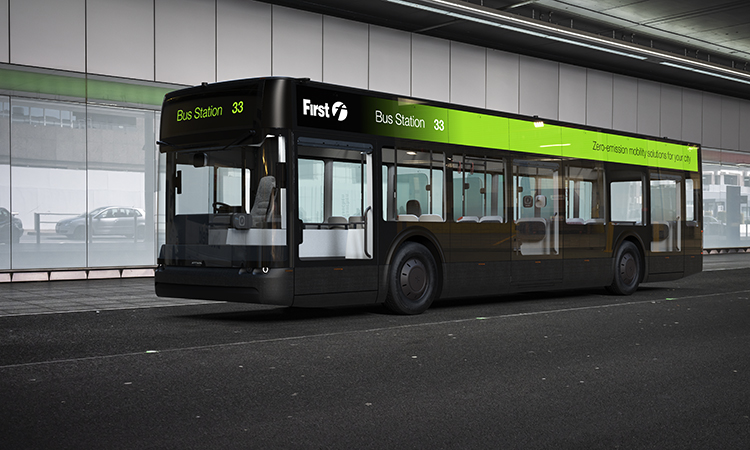 The UK’s first electric bus manufacturer, Arrival, has announced that it will begin testing its first vehicle later this year with First Group, which has declared that it will not buy diesel buses after 2022 with plans to eliminate exhaust emissions from its fleet by 2035.

First Group already operates electric buses in Leeds, Glasgow and York, as well as a 99-strong bio-methane fleet in Bristol and the world’s first hydrogen double-decker in Aberdeen, its home city. The company is also running separate trials of electric buses made by rival manufacturers, including BYD ADL, Switch Mobility (formerly Optare) and Yutong.

Scheduled to start in the autumn, the Arrival electric bus trials will involve four of the first vehicles being produced at Arrival’s research and development facility in Banbury, Oxfordshire, which opened last year. The manufacturer hopes to be building up to 11,000 buses per year by 2024 and is also considering a number of new sites for factories within the UK.

As well as a secondary facility at Bicester, also in Oxfordshire, Arrival has started work on a factory in Rock Hill, South Carolina, as it prepares a reverse listing on the Nasdaq stock exchange in New York at a valuation of $5.4bn (£3.9bn).

Arrival, which now employs more than 1,400 people, was founded in 2014 by Denis Sverdlov, a Russian telecoms entrepreneur. The company is using ‘micro factory’ facilities that breaks with the traditional model of large scale production lines, by using robots to assemble vehicles in ‘cells’.

It is anticipated that Arrival’s electric buses will be priced much like diesel equivalent versions, although the business estimates that the total cost of ownership will be significantly less because of lower fuel and maintenance costs. The range of its vehicles has not been disclosed but Arrival said they should be able to handle most urban routes.

The single-deck vehicle has a passenger seating capacity of 36 with a single front door and a flat floor for enhanced accessibility and more standing space. Arrival estimates that the bus is around 40% lighter than alternative battery-electric equivalents, through the use of common suspension front and rear and common wheels and tyres. It has the option of both AC and DC charging and has 310.8kWh energy storage capacity.

Commenting on the forthcoming trials with Arrival, First Bus managing director, Janette Bell, said, “As leaders in sustainable mobility, we’re excited to announce our partnership with Arrival, helping us bring some of the most innovative zero emission vehicles to the UK’s streets. We’re proud to be the first operator in the UK to trial Arrival’s electric buses and look forward to working together to accelerate the transition to zero emissions in our sector.”

John Dwight, Sales Director of Imperial Engineering, which supplies OE bus parts to First Group and hundreds of other operators across the country, said:

“Despite the effects of the pandemic, the bus and coach sector has again demonstrated its commitment to improve environmentally friendly services with news of this latest electric vehicle trial. As one of the UK’s leading suppliers of OE parts and components for buses and coaches, Imperial Engineering continues to adapt and expand its product range, which will ensure we respond efficiently to changes in the operator market with the uptake of more ULEV and zero emission models.”